Downtown on a busy Friday night in the early 60s

Four views from 9th and Polk

The white building is Montgomery Ward which operated Downtown until August 1967.

On this side is Mangles and on the far side C. R. Anthony's and Kress.

7th and Polk from atop the Fisk Building

The view west toward 8th Ave and Polk St.

The Fisk Building went up in 1927 providing space for the medical arts.

Looking down on 7th and Polk Street from The Fisk Building. 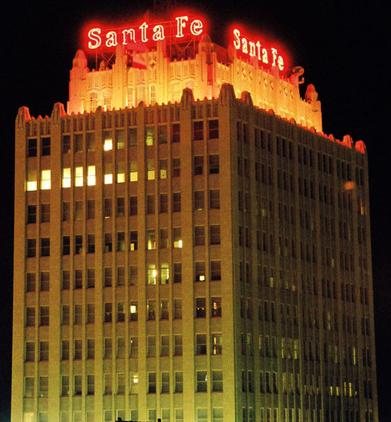 Home of the Western Lines Division of the AT&SF RR

An auditorium / meeting room is located on the top floor.

The DOWNTOWER MOTOR INN opened in 1965 and included underground parking.

Dave Wilson on the roof of The DOWNTOWNER HOTEL.

The City of Amarillo took over the transit system after purchasing old buses from Dallas in 1966.

(DOWNTOWNER Hotel is in the background, Amarillo National Bank is on the right)

The Amarillo Bus Company operated until 1966

The promotion is for the Sandra Dee movie "Tammy Tell Me True" at The Paramount Theater.

The Tri-State Fair Parade passes in front of The Hub Clothiers Store in the 600 block of Polk (September 18, 1967).

In front of the Vaughn Building at 4th and Polk, the location of their studios,

NE corner of 4th and Polk 1960 before The DOWNTOWNER was constructed.

The Rule Building at 3rd and Polk was the

KRESS Store at the SW corner of 7th and Polk

The Skaggs Store near 7th and Polk was open until 1970.

6th and Polk: Most astronomers now agree that this street sign is the exact Center of the Universe!

View looking south from 6th and Polk. T G & Y had a downtown store until the early '60s.

In 1969 the city foolishly purchased a fleet of small buses. They lasted less than 3 years.

For many years Amarillo Gear Company was located just north of Downtown on Polk Street.

Auditorium grounds at Christmas Time below. 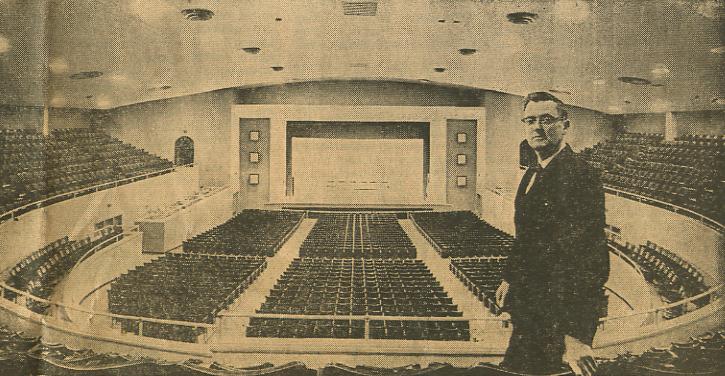 David DeWald takes a look inside the old City Auditorium the day before demolition begins in 1968.

The old auditorium comes down behind the new City Hall.

The 3 level parking garage at 5th and Polk was built in 1957 by Lindsey Nunn.

Downtown did not exist at that time. The parking structure remained in place until it was demolished about 1968.

BELOW: The Vaughn Building takes shape.

Feferman's Department Store was located at 4th and Taylor.

Looking NW at 6th and Pierce about 1965. This is the block which includes the old Liberty Theater.

The popular Canton Cafe was located at 5th and Taylor where the Amarillo National "Bronze Skyscraper" now stands.

By 1969 The Amarillo Hotel building was in it's last days.

The first floor was remodeled for use as the Teepee Western Store which operated several years.

The Capitol Hotel was at 4th and Pierce where the Globe News Center for the Performing Arts is now located.

Growing from a two to a five story building in 1962 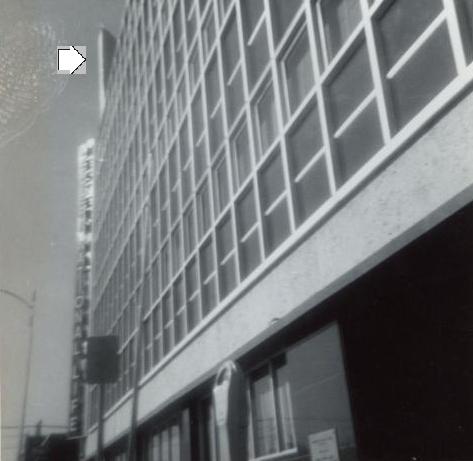 Greyhound acquired Continental Trailways in June 1987 and all bus traffic was moved to the remodeled Trailways Bus Depot.

Madame Queen #5000 displayed in front of the depot

Throughout the '60s former president Dwight D. (Ike) Eisenhower traveled through the city in his private rail car,

occasionally appearing on the rear deck to say a few words to people who gathered at the Santa Fe Depot.

A beautiful photo of Rock Island Train No. 21 with service from Memphis, TN through Amarillo to Tucumcari, NM

The Fillmore Street underpass beneath the Burlington and Rock Island tracks.

The Texas Zephyr Train No. 2 northbound and

Thanks for this information to

The Fort Worth & Denver Railroad created the end of track town which became Amarillo (1887).

This 15-story hotel was announced in 1962 but never built.

multi-level parking garage and fitness center for The MESA / then MAXOR Building (originally The VAUGHN Building). 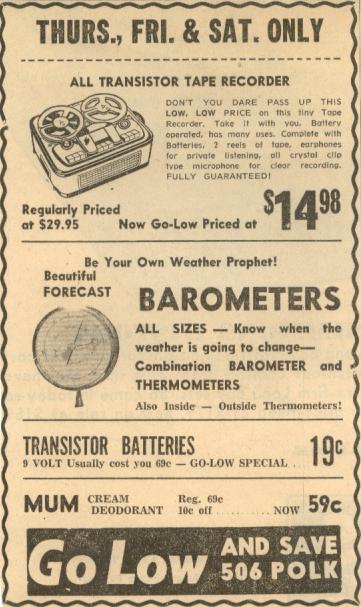 Ronnie Davis makes a purchase. Downtown stores were open until 9 PM on Thursdays.

"Lady Cool Breeze", on KLYN/KIXZ Radio in the early '60s

The studios were located in the Pioneer Hotel and featured a drive up window for making requests.

No photo available of the historic Cooper & Melin Record Shop at 616 S. Polk. 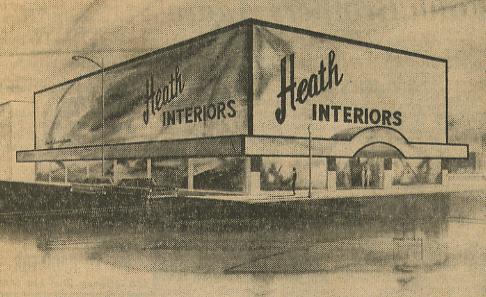 The Crossroads Motel is visible behind the Potter County Courthouse in this 1965 photo.

ABOVE: The Santa Fe Building and The First National Bank as seen from The Canyon E-Way in 1964

BELOW: Looking southwest from atop The Downtowner Hotel in 1966

View from the new City Hall in December 1968. 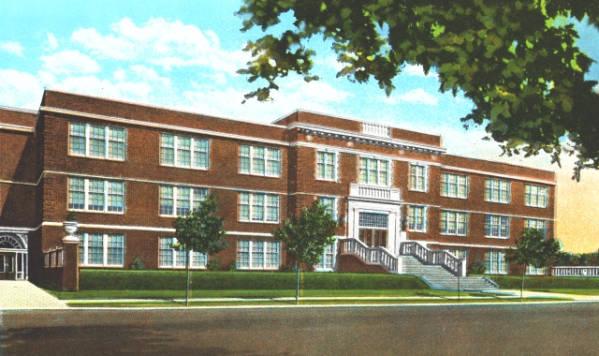 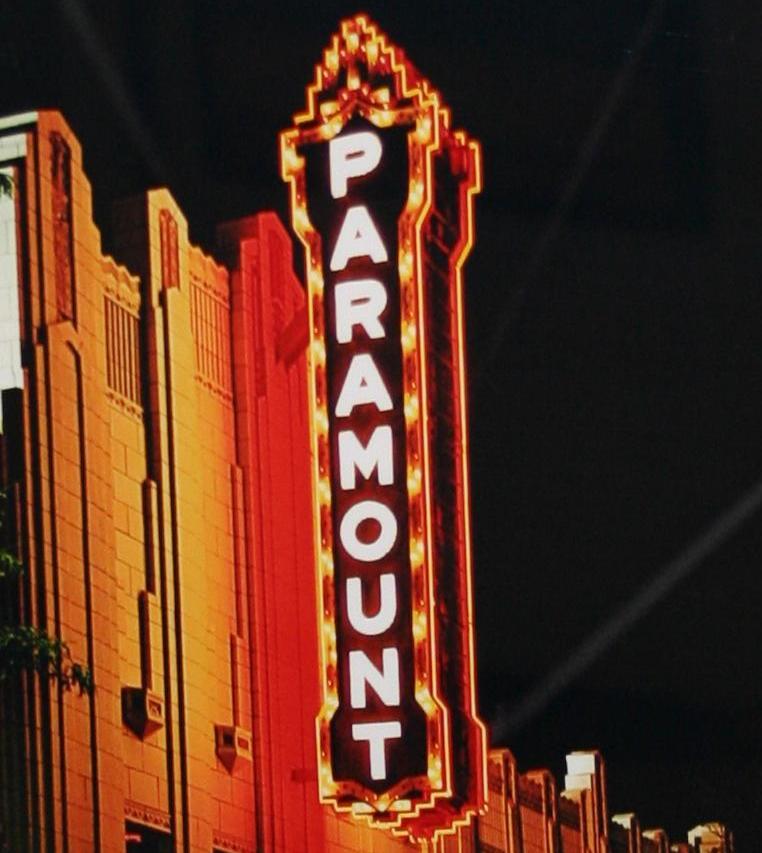 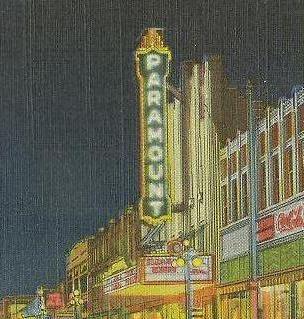 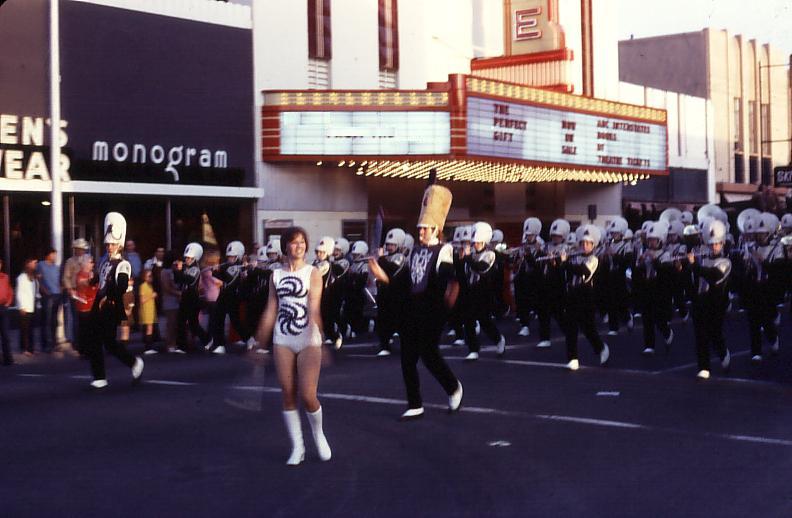 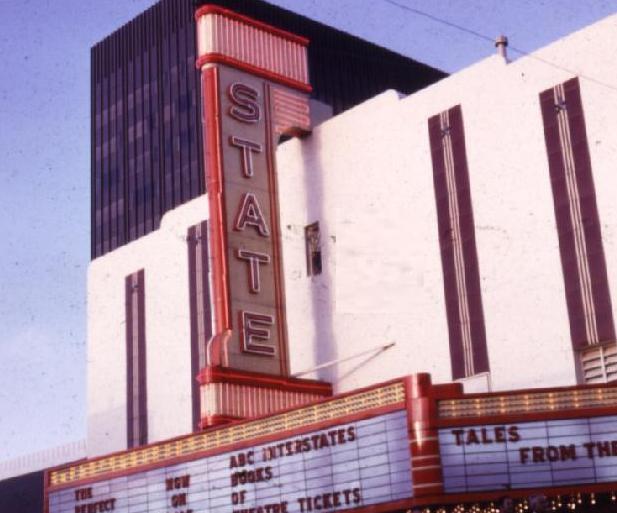 Jeanie Fielder in the ticket booth of the State Theater.

Also known for a short time as the TEXART THEATER.

The Victory, State Theater, and the entire block were demolished in 1982 and is now a 4 level parking garage for Amarillo National Plaza II.

The RIALTO THEATER was located on Taylor St between 3rd and 4th Aves.

About 1965 it was closed and converted into more space for Fefferman's Department Store.

The theater and department store were demolished in the late '70s. 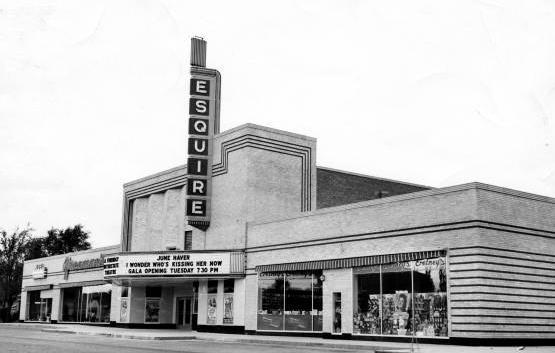 The entire block with the theater was demolished in 1982.

The Esquire and State Theaters were demolished in 1982

but The Paramount Building stills stands though not in use as a theater. 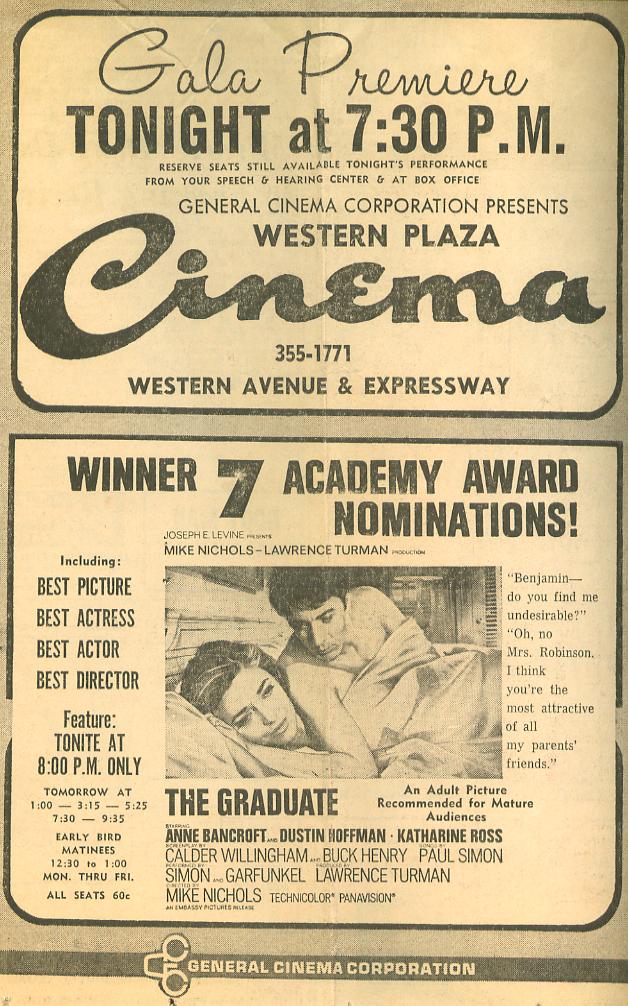 The building was demolished along with the rest of Western Plaza in 2007. 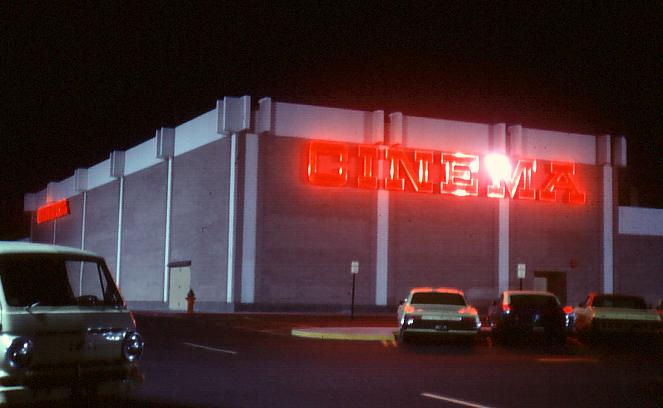 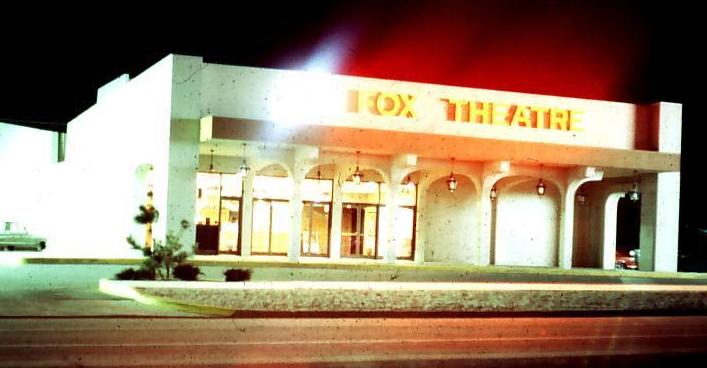 The building was demolished in the summer of '93. 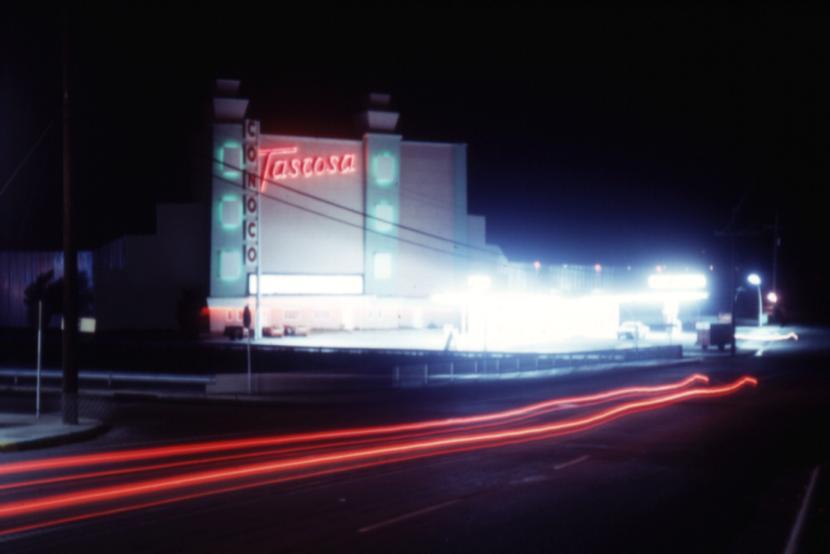 Tascosa Drive-In with its original design including mural.

(This screen burned to the ground in the late '70s)

(where the Georgia Street Super Walmart is now located)

near 9th Ave and Bell Street

(where the Winchester Apartment complex is now located) 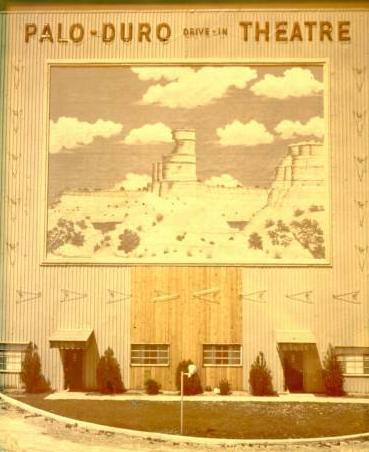 (where the Randall County Annex and DPS offices are now located) 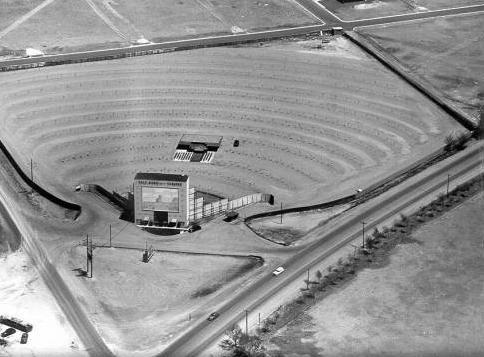 The Palo Duro and Twin Drive-Ins from high above. 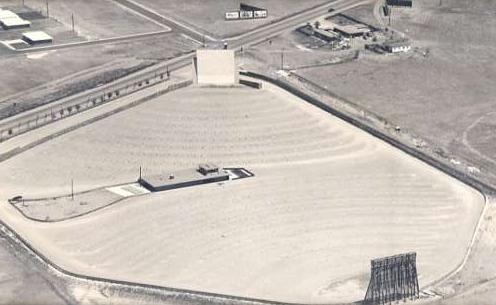 Waiting for the show to start circa 1960.

and about a dozen other theaters which vanished before 1960

GREAT FOOD BACK THEN 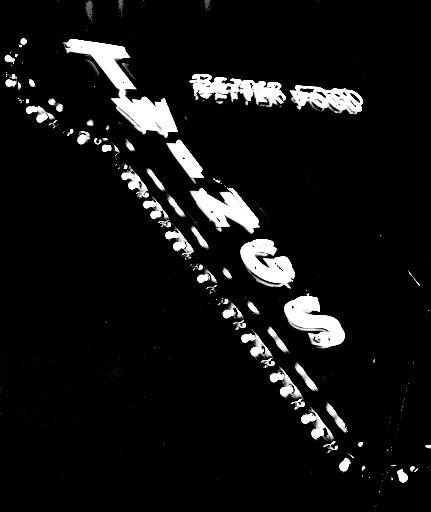 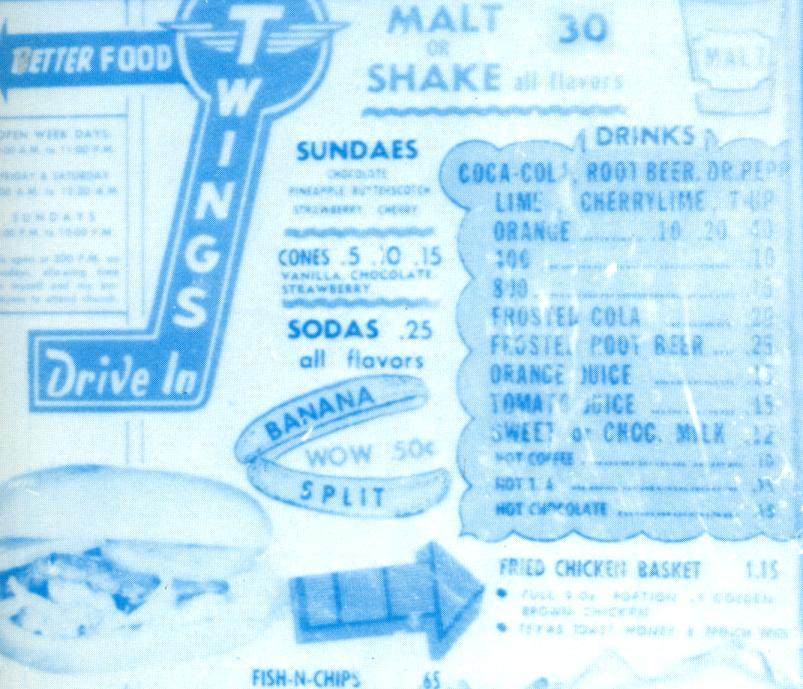 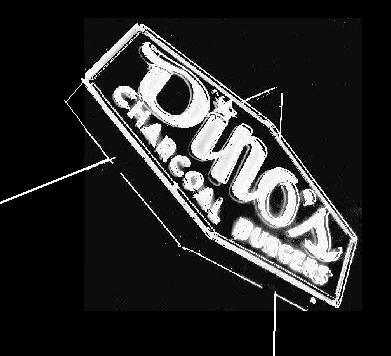 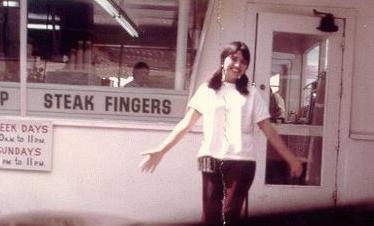 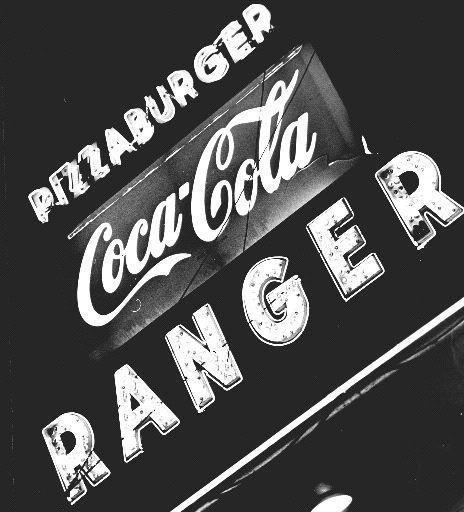 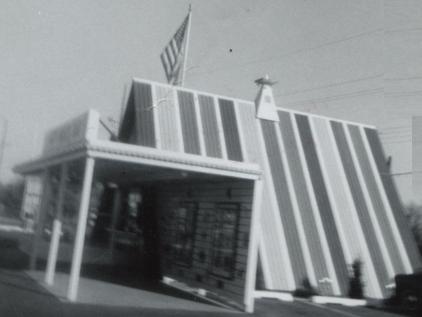 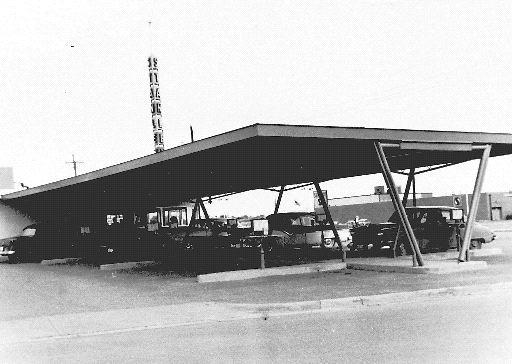 The Silver Grill was Downtown on Tyler Street between 7th and 8th.

oil painting of the original  Big Texan by Jerry McClanahan

Interior of the new Underwood's which was located just west of St. Anthony's Hospital on Amarillo Blvd (demolished for hospital expansion).

Nona's Cafe was located on Bell St. at The Canyon Expressway

Cattleman's Cafe has been in business more than 60 years 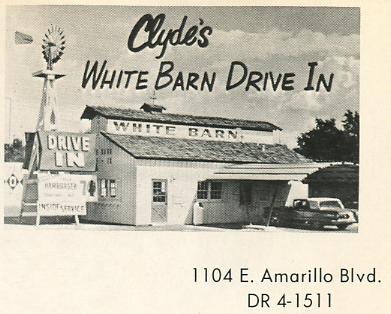 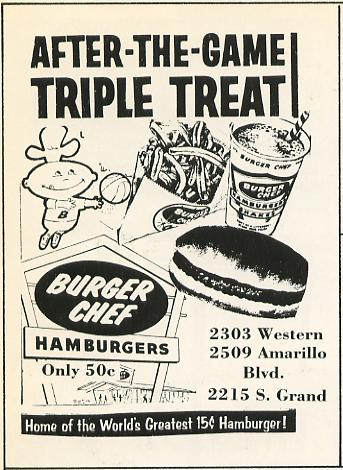 Spudnuts was open until February 2015

Myers Fried Chicken was actually "Myer's Drumstick Restaurant" but no one ever called it that.

Here's the TAKE OUT MENU <> provided by Dyann B. Folkner:

Wouldn't you love to have a BOXCAR of Myer's Fried Chicken right now?!

Almost no one remembers that Myers opened a second restaurant in 1978 on Bell Street at the Canyon Expressway (I-27).

It was across the street from Scotty Golf. It remained open for almost a year after the Georgia Street location closed.

THERE IS A LOT MORE!